How Long Does Implantation Bleeding Last?

Light bleeding or spotting is quite common in early pregnancy. In fact, bleeding in the first trimester occurs in 15-25% of pregnancies.

The presence of blood in early pregnancy doesn’t automatically signal an issue; it may just be something minor like implantation bleeding.

In this article we will look at the symptoms of implantation bleeding, and how long you could expect it to last. We will also look at some alternative causes of similar bleeding and how to tell the difference.

Implantation bleeding is the result of – you guessed it – implantation. This is when a fertilized egg embeds itself into the blood-rich lining of the uterus (the endometrium), where it will continue to grow into a little baby.

Just as the endometrium is shed each month you are not pregnant (i.e. your period), implantation may cause a small part of the lining to fall away resulting in some light bleeding.

This bleeding typically occurs about a week or two after fertilization, which usually falls between the time of ovulation and your normal scheduled period.

It is very common for implantation symptoms to mimic regular PMS symptoms. Oftentimes, women experiencing implantation, with or without bleeding, don’t know they’re pregnant yet and simply think that they are just having their monthly period.

If there is no bleeding, you may just experience some light cramping as well as fatigue, mood swings, headaches, and/or tender breasts. Any bleeding that is present is usually very light and may only be some minor spotting. 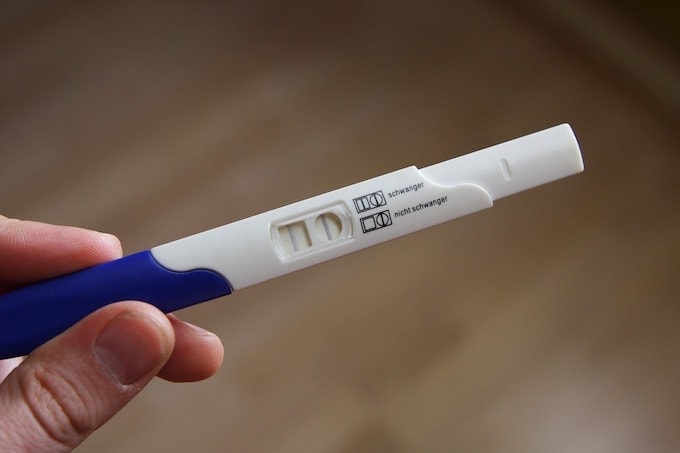 How Long Does Implantation Bleeding Last?

Though implantation bleeding is common, occurring in about one out of three pregnancies, not every woman who faces symptoms of implantation experiences bleeding.

Every woman’s experience is different; if you aren’t tracking your period or ovulation, you may not even notice the symptoms of implantation.

While most of the bleeding and cramping is extremely minor, there are some women who are more sensitive or may have slightly heavier bleeding (still nothing compared to a regular period).

Regardless of the severity of your symptoms, these usually only stick around for a maximum of 48 hours.

Is it Implantation Bleeding Or My Period

As we have seen, implantation can mimic your period in many ways, so how do you know which it is before you decide to take a pregnancy test?

There are four main differences to look for when trying to determine if your bleeding is the cause of implantation or your period:

You have your period every month; you are likely familiar with the color of your blood. Period blood usually ranges from bright to dark red.

However, implantation blood color typically falls on one end of the spectrum or the other – either light pink or dark rusty brown.

With the amount of blood lost during your period, you probably see clots on a regular basis when your period is at its heaviest.

Implantation bleeding, on the other hand, should not have any clots present.

As we just saw, implantation bleeding usually only lasts up to a couple of days. Your period probably lasts an average of 5-7 days every month.

If you are on birth control, you may bleed for a shorter time if you even bleed at all.

The amount of blood lost during your period starts heavy and slowly tapers off as your cycle comes to a close. You can soak through several pads or tampons while you are having your period.

Implantation bleeding should only be very light spotting. There should be no need for a pad or tampon.

When To Take A Pregnancy Test

It can be difficult to determine when the best time to take a pregnancy test is. It is easy to become paranoid and jump the gun, testing too early to get an accurate result.

You may also be lucky enough to go through the first few weeks of pregnancy with very few or no symptoms at all, which does not lead you to the decision to take a pregnancy test.

Pregnancy tests, both blood (at the doctor) and urine (at home), test for the pregnancy hormone Human Chorionic Gonadotropin (hCG).

If you receive a positive result, you are pregnant since the test has detected the presence of hCG. However, a test taken too soon can result in a false negative.

The best time to take a pregnancy test is usually 3-4 days after implantation, and of course, the accuracy percentage increases the longer you wait to test after your expected period (at least a day or two).

For women whose periods are very regular, a missed period is often the first sign of pregnancy.

However, if your periods are irregular or you don’t keep track of your periods and ovulation, it can be hard to figure out when that window of time falls.

If you think you’re pregnant, but you’re unsure and you’ve taken a home pregnancy test with a negative test, call your doctor and schedule a more definitive blood test.

Since implantation doesn’t last very long and does not come with very many symptoms, there aren’t usually any risks or complications associated with it. It should pass on its own after just a few hours or days.

However, misinterpretation of symptoms can result in a misdiagnosis.

You may think you are just experiencing implantation bleeding when you may actually be experiencing something much more serious (we will go into this in more depth in the next section).

Most ectopic pregnancies occur in the fallopian tubes and are the result of some sort of preexisting issue.

Adhesions or scar tissue from a previous infection or surgery as well as a current infection can cause blockages (partial or complete) in the fallopian tubes that do not allow the egg to pass through to the uterus.

There are other risk factors that increase the likelihood of an ectopic pregnancy including:

With an ectopic pregnancy, you may experience vaginal bleeding and sharp or stabbing pain (comes and goes). The amount of bleeding may be heavy but it can also be light like implantation bleeding. It can be very easy to confuse the symptoms of the two.

The main difference is that there will likely be more pain with an ectopic pregnancy. There are more sharp pains rather than cramps and your abdomen or pelvis may feel tender.

Unfortunately, there is really no way to save an ectopic pregnancy and there is often major damage done to the affected fallopian tube.

Your doctor may try to help your body absorb the pregnancy tissue or remove it laparoscopically in order to save the tube, but if there is too much damage or the tube has ruptured, you will need surgery in order to repair or remove the tube.

There is still a chance that you can have a successful pregnancy in the future, but the chance of a recurrent ectopic pregnancy is increased. 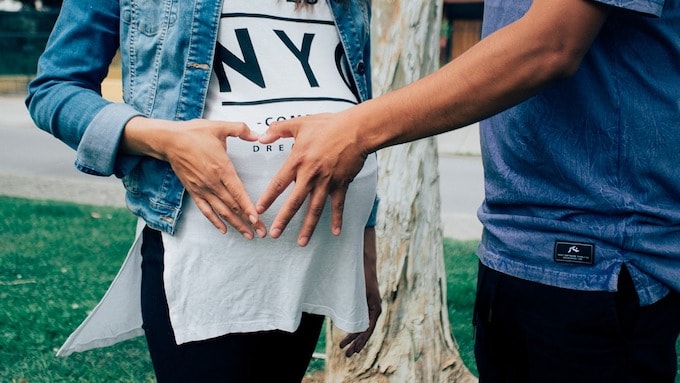 Any bleeding in pregnancy should be closely monitored, especially if your blood type is not compatible with your baby’s. This can result in Rh disease.

Rh disease is a type of anemia that can be dangerous to your baby, possibly even life-threatening.

Bleeding during pregnancy can cause your baby’s blood to mix with yours, and if you are Rh-negative and your baby is Rh-positive, your baby is at risk for Rh disease.

If your baby does develop Rh disease, they are at risk for not only anemia but also heart failure, brain damage, jaundice, and stillbirth.

On a positive note, Rh disease is preventable. Once your blood type has been determined through routine blood tests at your first prenatal appointment, your doctor will be prepared to administer a shot of Rho(D) immune globin (marketed as RhoGAM).

If there is bleeding present in your pregnancy and you are Rh-negative, you will be given this shot immediately to prevent Rh disease in your baby.

If there is no bleeding, you will still be given this shot around 28 weeks of pregnancy and again after your baby’s birth if their blood type is positive.

Other Potential Causes Of Bleeding

Just because bleeding doesn’t always signal a serious pregnancy complication, that doesn’t mean you shouldn’t contact your doctor and monitor the bleeding closely.

This is especially important if you already know you are pregnant.

Of course, we already know that implantation and periods can be confused due to their similar symptoms, but there are other potential causes of bleeding and symptoms similar to those we’ve already gone through.

Irritation of the cervix through sexual intercourse or routine vaginal exams can cause a bit of spotting, especially later in pregnancy.

Your doctor may give you a panty liner after your appointment in case you notice a little bit of blood.

Another cause of light bleeding in early pregnancy may just be some hormonal bleeding. This can occur within the first 4 to 8 weeks, around the time your period is usually due.

It can also be mistaken for a period and typically subsides after the first trimester when the placenta is able to produce the hormones needed for the pregnancy.

Hematomas can also occur, causing some minor bleeding that can be alarming and mistaken for a miscarriage. These little pools of blood form when the placenta detaches from the uterine wall.

Depending on the size, you may need to be put on bed rest or limited activity until it resolves.

Bleeding during pregnancy can also signal something very serious; in fact, it can be the first sign of a miscarriage. Patterns in bleeding can vary, from light spotting to heavier bleeding with clotting.

There can also be period-like cramps.

Problems with the placenta can also cause bleeding, but these issues and symptoms usually don’t manifest until later in the pregnancy.

What To Do About It

During the first trimester, talk to your doctor at your next appointment if you have light bleeding that goes away within a day, or within 24 hours if you have any amount of bleeding that lasts for longer than a day.

Contact your doctor immediately if you have any amount of bleeding during the second and third trimesters.

If you notice any pink or bloody discharge within the final weeks of pregnancy, this can signal the beginning of labor.

When you contact your doctor or visit the emergency room, they will ask you a lot of questions and possibly run a few tests to try to determine the source of bleeding.

Be prepared by keeping track of the amount, color, and content of bleeding and being ready for blood and urine tests as well as a vaginal exam or ultrasound.

Bleeding during pregnancy does not always signal an issue with pregnancy. If you have some minor cramping and light spotting near your scheduled period – possibly even before you know you’re pregnant – it may just be a sign of implantation.

This bleeding should not last long though, only about a maximum of two days or so.

Be sure to discuss any concerns with your doctor and follow directions to ensure you have a happy and safe pregnancy.

Questions or comments? Let us know!

PrevPreviousGalactagogues: 10 Herbs to Increase Milk Supply (With DIY Recipes)
NextSigns You May be Pregnant with Twins; And How to Prepare for the Journey AheadNext

The information contained on katherinerosman.com is intended for informational and educational purposes only.

Thanks for subscribing! Please check your email and add us to your safe list so that your e-book doesn't end up in the junk folder!