What Does Morning Sickness Feel Like, and How to Deal with It?

A positive pregnancy test can bring so much joy, even if you do not feel pregnant yet.

You begin to look forward to all the milestones of pregnancy: the first sonogram, the moment your belly “pops”, the gender reveal, and the first kicks, just to name a few.

If you are like me, you will not feel pregnant after you see that positive sign on that little stick. But I will tell you, nothing makes you feel as pregnant, in those early weeks like a good bout of morning sickness.

What Is Morning Sickness?

Morning sickness is the nausea (and possible vomiting) that women experience in the early stages of their pregnancy.

Most women do not know they are pregnant until they are about five weeks in, and morning sickness will usually kick in at week six. So it can be one of the first indicators that you are indeed pregnant.

It is a very common condition, with statistics showing up to 90% of women experiencing some form of nausea.

There may or may not be vomiting associated with morning sickness, and you can experience fatigue as well. You may very well feel like you have a minor case of the flu.

The term morning sickness is a bit deceiving. While most women do experience the worst part of their nausea in the morning, it can occur at any point in the day.

Some women experience manageable nausea all day, while others may have severe bouts when they first wake up or even when they settle down for bed at night.

Most days I just felt like I was living in a constant state of nausea. There were days that were worse than others, leaving me in bed watching TV all day, eating crackers and drinking ginger ale.

But it will eventually pass. Although the fatigue will likely remain, as your body is working overtime to make this little human. 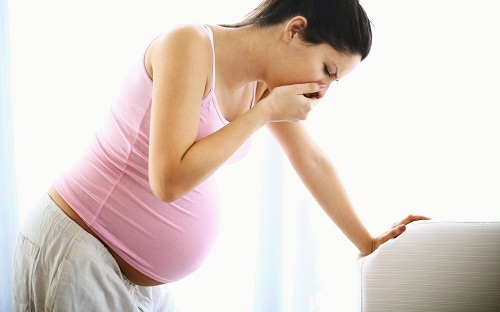 The definite cause of morning sickness is currently unknown, but many professionals have some interesting theories as to what may be responsible.

The first, and most likely, is due to the increased level of hormones.

Your body is producing excess levels of estrogen and progesterone during pregnancy, as well as human chorionic gonadotropin (hCG), which is also known as the pregnancy hormone.

These hormones, particularly hCG, are at their highest level during the first trimester, which can explain why most morning sickness ends after the first 3 months of pregnancy.

This theory is also backed by the fact that morning sickness can also be worse when carrying multiples, which produces higher levels of hCG as well.

You may also find that certain foods you used to like do not agree with you during pregnancy since your stomach and sense of smell are much more sensitive.

After much trial and error, I found that I could not eat anything tomato-based without feeling nauseous (and possibly vomiting) for hours afterwards.

It may take some time and experimenting to narrow down what triggers a bout of nausea or vomiting, but once you figure it out, you will be thankful to eliminate at least one cause of your sickness.

Indication Of A Healthy Pregnancy?

There are many different opinions regarding what morning sickness could mean for your pregnancy.

Some studies have shown that women with little to no morning sickness have a higher rate of miscarriage.

This may be due to low levels of hCG, which has also been linked to miscarriage. However, there are still women who go on to have healthy pregnancies and babies with no morning sickness.

Many doctors also say that morning sickness means that the placenta is developing well, which will nourish your baby throughout the rest of your pregnancy.

And, if nothing else, the presence of morning sickness can be a reassurance that you are, indeed, pregnant and that your baby is happy and growing in your womb.

Dealing with the Symptoms of Morning Sickness

Whether your morning sickness is minor or severe (in severe cases you should call a doctor, which we will talk about later), you will likely be looking for some relief.

Here are some tips to help alleviate the symptoms and keep yourself healthy and feeling well until this phase passes.

1. Eat something small before getting out of bed

Since most morning sickness is triggered – you guessed it – in the morning, keep something small and dry by your bed.

I used to keep a giant carton of Goldfish on my bedside table to snack on during the night when I got hungry and in the morning before I got up. This can help prevent a wave of nausea when you get out of bed.

Having a full stomach can make your nausea worse.

Instead of eating three big meals a day, try breaking up your meals into smaller portions, and snacking on healthy foods in between. This can keep your stomach feeling more at ease throughout the day.

Staying hydrated during pregnancy is extremely important, and it is even more so if you are vomiting regularly due to morning sickness, since this can dehydrate you.

Also, drinking fluids before or after a meal (not during) can help stave off nausea as well.

4. Open a window when cooking

Your nose is way more sensitive during pregnancy, which can contribute to increased nausea. When you, or someone else, is cooking, try opening a window to allow fresh air in and odors out if certain smells make you nauseous.

5. Try some tried and true remedies

There are certain foods and drinks that have been used for years to alleviate the symptoms of nausea.

Anything dry (like crackers) or ginger-based (candy or ginger ale), can help, as well as smelling or eating something with lemon. 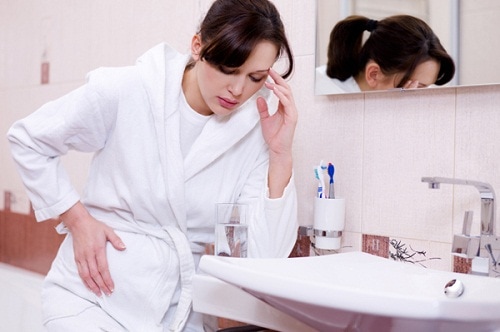 1. Lie down after eating

Just like lying down after a meal can trigger heartburn, it can also set off your morning sickness.

When your body is in a horizontal position, the digestive system needs to work harder which can cause food to be backed up in your stomach and esophagus.

As tempting as it may be to avoid anything, including meals, that may trigger your nausea, skipping meals is not a good idea.

Not only are you denying your body and your baby necessary nutrients, you can make your nausea worse when your stomach acids have nothing to absorb.

3. Take medication without consulting a doctor

There are many great medications on the market that can help to alleviate nausea symptoms, however many of these are not safe to take during pregnancy.

You should always consult your doctor before taking anything medicinal, outside of your prenatal vitamin, including OTC painkillers and antacids.

We are going to go into some of these symptoms in the next section, but you should never ignore something serious as it could be extremely dangerous for both you and your baby.

Early on in my pregnancy I found that I would feel pretty awful almost every morning. But when I got up and started on my daily routine it would fade into the background… and I never missed a day’s work.

It would have been very easy to make it as far as the couch, and sit around feeling sorry for myself all day. But just getting on with things really helped me work through the symptoms.

The severity differs for each person, but if you can, doing anything other than sitting around can help take your mind off things.

When To Seek Medical Assistance

First of all, I just wanted to say that you should seek help from your Doctor as soon as you feel you need to.

This section is for the more stubborn minded (and tougher?) amongst us who have the habit of battling through what could be serious symptoms.

With morning sickness being an accepted norm, a lot of women do wait too long to seek medical assistance and think that the intense nausea is just par for the course.

Some symptoms can be a sign of something worse, even though severe cases are only seen in around 1% of pregnancies.

The more severe cases can result in hyperemesis gravidarum.

This condition is often accompanied by severe nausea and vomiting that do not subside, in which little to no food or drink will stay down, and weight loss occurs.

Mild cases can often be treated at home with attention to diet and rest. Severe cases, on the other hand, result in hospital stays, receiving fluids through an IV.

There are also factors that can increase your risk of developing hyperemesis gravidarum.

Family history or previous pregnancies can give you an indication that you may have it. Also, being pregnant with a girl has been shown to increase your risk as well, perhaps due to a different level of hormones.

Other serious symptoms to look out for include passing only a small amount of dark colored urine (which can be a sign of dehydration), you feel dizzy when you stand up, or you vomit anything that looks like blood.

Morning sickness is very common among pregnant women. While it is no one’s favorite thing, with the constant state of nausea and occasional vomiting, it can still bring you joy, knowing that you are carrying a little baby within you.

And, it does subside in most cases lasting about 3 months. So, hang in there!

If you have questions about morning sickness, or if you have had a unique experience during your pregnancy, share with us in the comments below. And share this article with others who may find it helpful.

PrevPreviousDoes Spotting Before Your Period Mean You Are Pregnant?
NextHow Much Milk Does My Baby Need From Each Feed?Next

The information contained on katherinerosman.com is intended for informational and educational purposes only.

Thanks for subscribing! Please check your email and add us to your safe list so that your e-book doesn't end up in the junk folder!